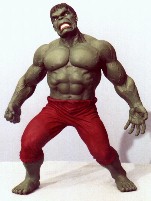 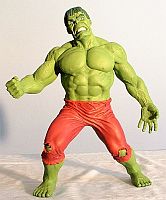 My goal was to modify the 1990 Horizon Hulk kit. To me, the original kit has an "unexciting" pose, with both of the Hulks' arms down by his sides. So I decided to rotate his right arm and as though he is shaking his clenched fist at the viewer. Also, to make the model look even more interesting, I added the classic ripped knees in his pants

Note that I bought this kit after someone who had already started it by trimming the parts, and before assembling them, painted them. I had to scrub-off all of the paint before I could assemble it. That is why the parts have a yellowish-green tinge in the photos below. The photo below shows the upper torso, trimmed and assembled, with both arms attached.The right arm was rotated approximately 30 degrees. This caused a misalignment with the shoulder muscles. so I had to grind away the high spots, and fill-in with putty in the low spots. I think I did a good job of making the muscles "look natural", though if you really want to compare the right side to the left side muscles, you can see a slight difference in how they line-up.

Note that to help "visually hide" the putty seam lines for both arms, I extended the raised veins across the seams. 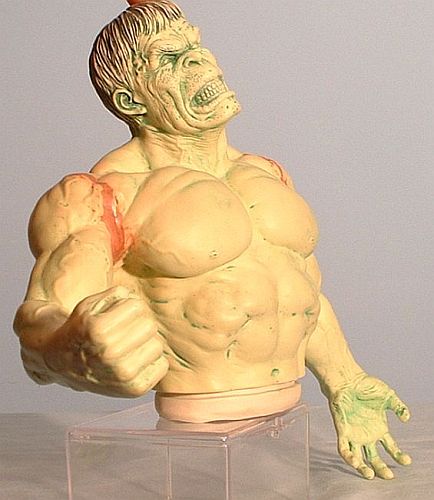 To make the ripped knees in his pants, my first attempt was to use scraps of vinyl to form a circle around his knees, but the vinyl was too thick and it was difficult to get them the right random triangular shapes. So it occurred to me to use fabric. So I used a nickel as a template to mark of two round circles on an old T-shirt. After cutting out each circle, I folded each in half, and with scissors made various cuts from the center out towards the edges but not all the way through. The cotton fabric then pulled back towards the edges. I then placed each circle around a knee cap, and tacked it in place with the very-thin Super Glue (see right knee in photo below). Then I soaked all of the frayed ends with more Super Glue, so that when the glue dried, the cloth was stiff and each frayed end would hold it's shape, sticking outward from his knee. Then I blended the patch with the surrounding pants area with glazing putty (see left knee in photo below). 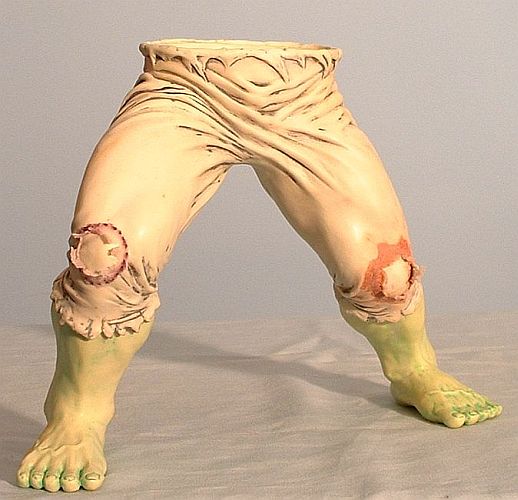 Modified model - assembled and and painted.