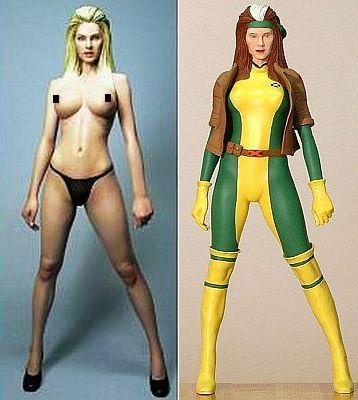 I wanted to add another X-Men character to my X-Men diorama, but I couldn't find any 1/6 scale kits of them, so as I did with the Iceman model in 2009, I decided to "make my own". I decided to make Rogue, and needed to find a 1/6 scale basic "female form". There were quite a few so-called 1/6 scale kits out there of females in various stages of dress or undress. The problem is since Rogue's statistics says she is 5' 8" tall, that meant I needed a completed kit that was at least 11" high. I finally settled on the 'Nude Stripper' resin kit that I found on EBay (see photo above). The problem was that in that little photo on eBay, I didn't realize that her hair cascaded over the front of her shoulders !! This caused me a "lot of grief" when it came time to make the jacket for Rogue

. Also, the pose is a "bit static" but that is one of the things I have to live with when converting someone else's kit.

Note: I am blacking-out the nipples for the photos of the nude model since I want to keep my site G-rated.

My goal was to convert this stripper model into the Jim Lee version of Rogue, since I feel her green-yellow outfit is the classic one. At first I was intimidated about adding the flight jacket, which is also part of her classic look, so I was thinking of having her not wear it as per the reference picture 1 below. I found another reference picture in this anime style statue of her. I used the concept of the boot flaps from that picture, but I didn't like the small jacket. So I found a third picture from an actual comic that confirmed to me that her jacket is an actual "regular" flight jacket, so I made it as such. 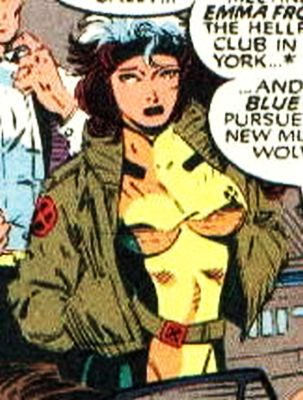 Finally I would like to thank Elaine Perna, probably the biggest Rogue fan out there !!

Her advise and additional reference pictures were invaluable in helping me figure out some of the details needed to complete this project !!

I could have just painted over the upper body parts with yellow and green paint, since in the comics they often treat the spandex like it's glued to the character's skin anyway. But I wanted my model to look like a woman with a tight spandex top. So I came-up with the idea of rather than trying to emulate a spandex top by filling between her breasts with putty, I stretched a very old piece of T-shirt over her breasts and upper torso. To me this has a more natural look of spandex bridging her cleavage !! 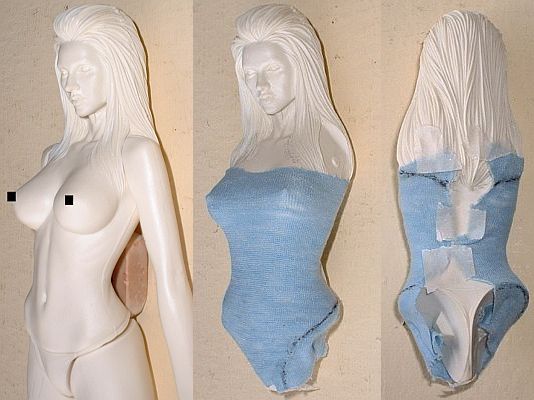 Since the nipples were "so prominent", I had to sand these down to "nubs". Then I stretched a piece of the cloth around the front and held it in place with masking tape. At this point I could mark where to trim the cloth for a better fit (see photos above). Note that the cascading hair over the front of each shoulder was already causing me problems since I couldn't have the cloth go up to her neck as I would have preferred. 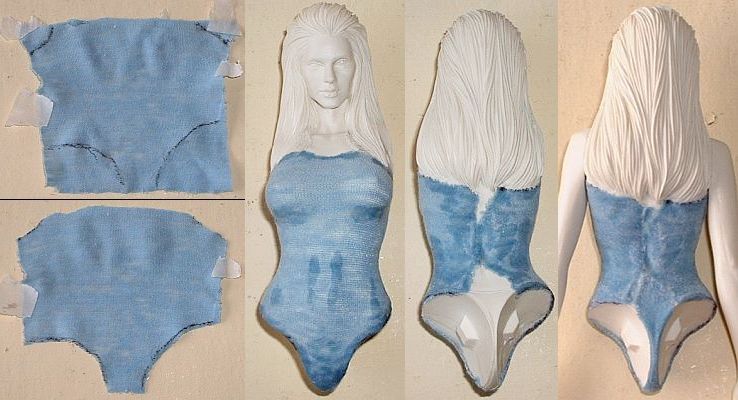 The trimmed cloth was then reapplied; this time carefully tacking it down with "medium" super-glue, first on the front and then on the back. Note that there were still gaps in the cloth at the back. Since at this point I wasn't sure if I was going to make the jacket or not, I decided to patch those gaps with smaller pieces of cloth. I then stiffened the cloth, as well as adhered it to the resin surfaces, by applying a coating of "thin" super-glue over all the cloth. The hope here was that this would make a nice textured surface.

Though I probably didn't need to, since I wasn't sure what kind of texture I would have after applying the coating of "thin" super-glue, I also wrapped the thighs of both legs. This also saved me the trouble of having to sand and fill the mold seams that ran down the front and back of each leg. 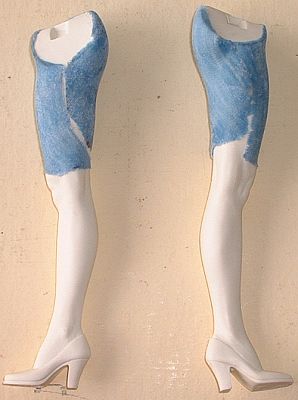 After forming her spandex costume, I had to accessorize her with boots, gloves, belt, headband, etc. For these items, I used ProCreate Epoxy Putty, worked into a thin sheet or strip. Two small sheets were wrapped around each lower leg to form boots. Small strips were used to form her belt, headband and small collar piece.

I decided that the cloth coated with super-glue was "too rough", so I mixed Bondo Glazing putty with denatured alcohol (about 50% of each). Using a stiff brush, I put a couple of coats over the cloth areas. When dry, I sanded and reapplied glazing putty as needed, until I had smooth surfaces (see photos below). 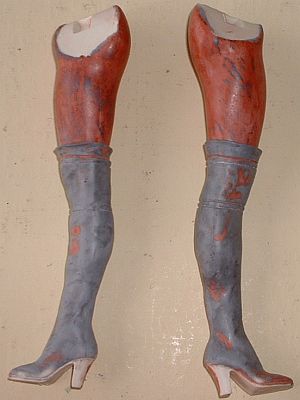 Making the jacket was the most challenging part of this project. I spent a lot of time and research on how the jacket should look, how to interface it to the hair cascading down the front of her shoulders; what to do for a collar; and doing trial and error with paper and cloth templates. I finally came-up with the paper template in the photo below. I formed a sheet of Epoxy Putty and let it set on wax paper for about an hour, so that it would set-up a bit (too tacky to handle immediately after combining the two parts together), but still be "workable". At that point I used the paper template and trimmed the sheet of putty. 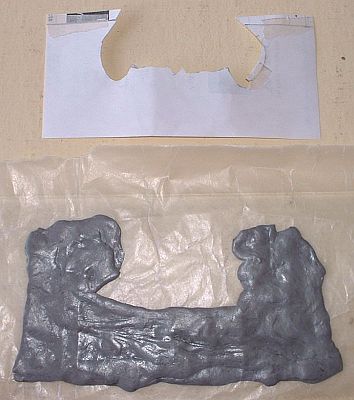 Jacket: template and sheet of epoxy putty before trimming.

Before the putty set, I pressed it into place at the back just below the hair, and worked around her two arm sockets. It probably would have looked "more real" if I had folded it around her breasts, but then that would have hid some of that character's most "outstanding features"

, as well as some details like the X-symbol above her left breast. Unfortunately I spent too much time trying to blend the putty into the cascading hair, and the putty stiffened too much, and I was not able to make folds in the jacket, esp. on her left side. It sort of sticks out like a gate, and doesn't hang as naturally as I would have liked. 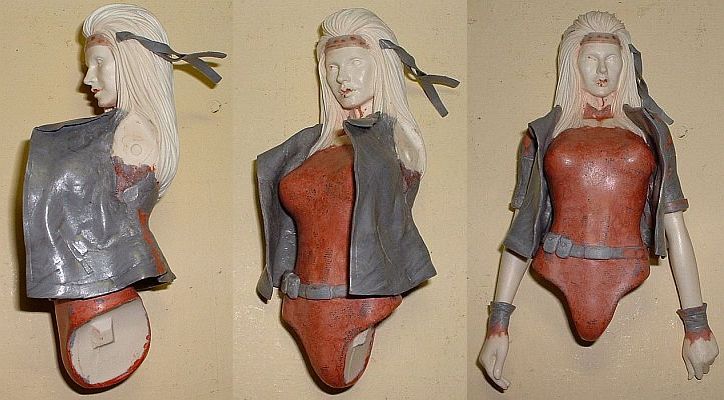 The third photo above shows the completed upper torso with arms set in place. The shoulders for each arm has the sleeve portion of the jacket. I also added an extension of her headband ribbon, and two utility pouches, as Elaine Perna helped to make me aware of 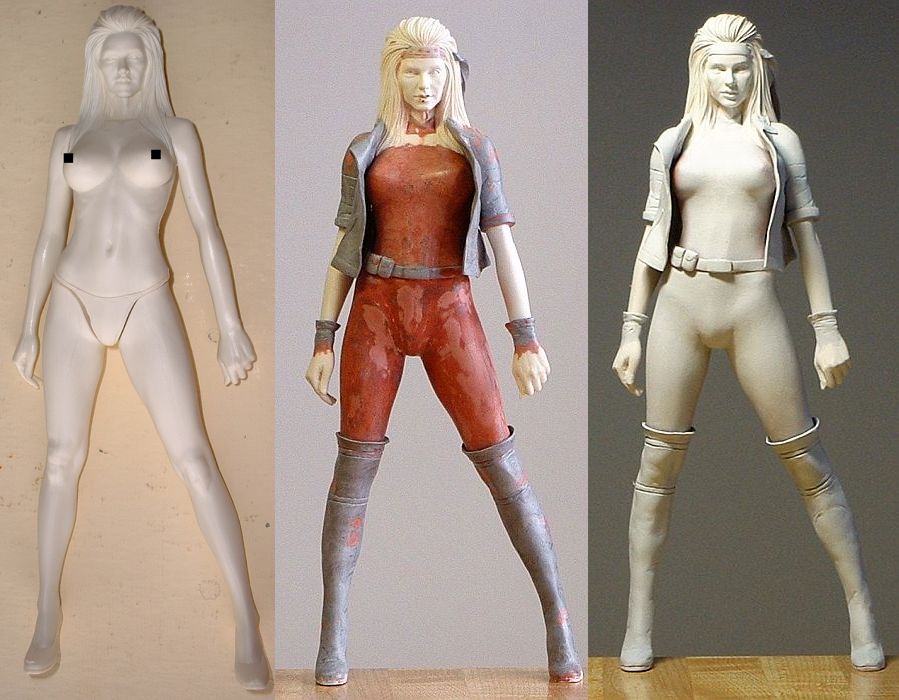 The painting completed the model. Key painting points are:

In the 19 or so years since I have been building these types of models, this is the one I may be the proudest of since I pretty much made everything myself !! 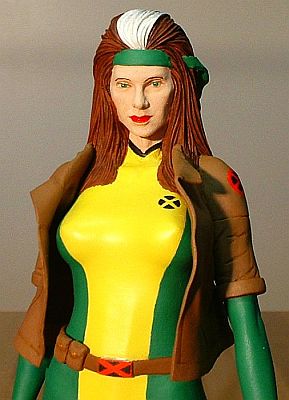