My goal was to convert the 1990 Horizon Thor kit to a Silver Age (1960's - 1970's) version. The original kit was of the Ron Frenz's version of Thor, as first seen in Thor issue #390 (1988), per the cover below. There wasn't really much of a change except that Thor's sides and upper ribs are exposed. I basically covered that area up as per issue #104 below. But I made three other modifications to the kit !! 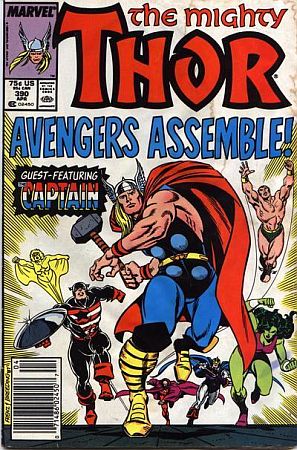 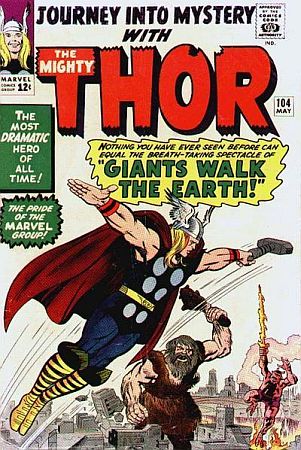 I had this kit for years but always resisted building it because:

So now being a "more experienced" vinyl kit model builder, I decided to change the face, and make my own cape.

Note: I used these four materials to help me with this project ...

I would never had felt "skilled enough" to modify a human face on one of these kits, so I asked my neighbor who is a retired art teacher and professional artist and sculptor for help. She looked at Thor's face and told me these were the things technically wrong with it:

So I set out to correct those flaws, meanwhile removing the stupid grimace. I used a combination of Squadron White Putty and Bondo Glazing Putty to cover the mouth, as well as the wide muscle furrows on either side of the mouth (photos #2 & 3 below). I then formed new closed lips, philtrum and mouth muscle furrows, (photo #4 below). After painting the face (photo #5 below), Thor now has the stoic look I associate with a Super-hero !!

Wiping the stupid grimace off of Thor's face. 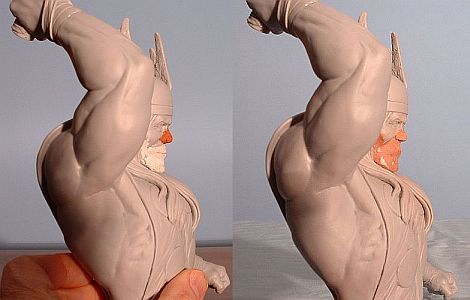 Side view: building-out of Thor's mouth area and nose.

I suspect that Horizon decided to go with this vacu-formed cape (see photo below), which I have never seen in any of the other Horizon kits, was to save money. This cape would have required a lot of vinyl, more than half of which would have been cut-off from the "funnel-shaped" piece, and thrown-away. They probably would have also required an even larger box for the kit.

Another problem with a cape as designed is how do you put it over the long hair that is molded onto his back. Also, where do you attach the cape to his right shoulder, since that area is totally covered by his raised right arm !!

So I set-out to make a more "real-looking" and functional cape. I found that a knit fabric was the best choice, since it doesn't have issues with fraying at the cut edges like cotton (esp. and old T-shirt) does. So I got a piece of red knit fabric, and used the vacu-formed cape as a template for cutting the rectangle for the cape. I then used thin Super-glue to form pleats at the very top of the cape (neck area). I then formed those pleats down to the bottom edge, and sprayed the cape with lots of Createx Transparent Red Airbrush paint. This served two purposes:

The result is in the right-hand photo below. 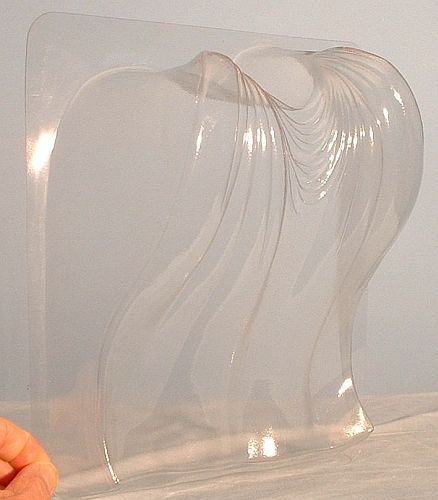 The next issue was how to attach the cloth cape to Thor's body. Since his flowing blond locks go over the cape, the solution was to very carefully cut the various strands of hair away from his back, all the way to the top of each shoulder !! This now creates a cavity where the top of the cape can be tucked into. The right and left edges of the cape are then folded-over, and at the very top of the fold, each is glued to the appropriate spot on the top of the respective shoulder. The flexible cloth cape allows for stretching it at an angle such that the upper right corner of the cape can be glued to the right shoulder. 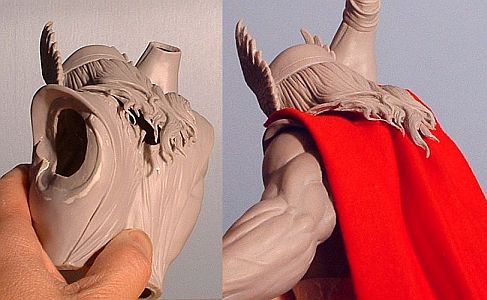 Attaching the cloth cape to the Thor's back and shoulders.

To make this kit the Silver-Age version, I had to cover-up the exposed skin areas under his armpits, down to his waist. Rather than just painting the flesh areas black, I felt that the muscles had to be covered over, to reflect that he has (albeit a very) tight vest covering those two areas. So on each side, I used a finely rolled-up piece of ProCreate Epoxy to define the edge of the vest underneath the armpit (photo #1 below). I then used layers of Bondo Glazing putty to cover over the muscles, and to build-up a thicker vest, merging it into the existing vest lines (photo #2 below). If I had to do one thing over again, I would have taken more time to create some creases on the new built-up areas, so as to better blend these areas to the front of the vest where a lot of creases were sculpted-in. 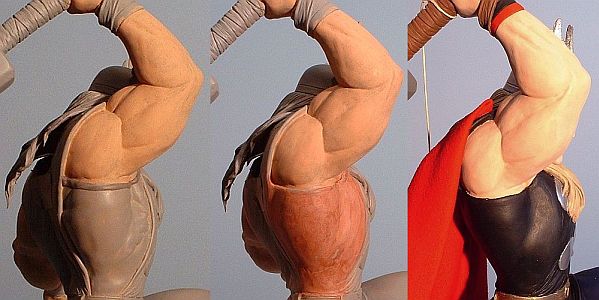 Building-up the sides to cover the exposed skin areas.

To get around the problem of gluing him to the kit's rock formation, so he can stand on a shelf, I decided to hang him from the ceiling. His pose can be interpreted as him leaping down ready to strike his foe. Attaching the string just at the point where the hammer comes out from the top of his hand, allows him to hang very upright.

As per photo #2 below, you can see that I puttied over the 14 surfaces of the hammer to make it smoother, more like the forged metal that it is supposed to be. Likewise for the end of the handle sticking out of the top of the hammer.

Also, in the comics, there are three items that were always colored yellow. Rather than actually paint his hair, belt and boots yellow, I deemed that anything that was yellow in the comics is "golden". So for his hair, I did more yellow highlighting than would probably be for real human blond hair .... call it artistic license

. His belt I painted gold, so I justified that the strapping and buckles on his boots would also be gold ... after-all he is a Prince among the Norse Gods !! I left the rest of the boots brown for a "more realistic" look. 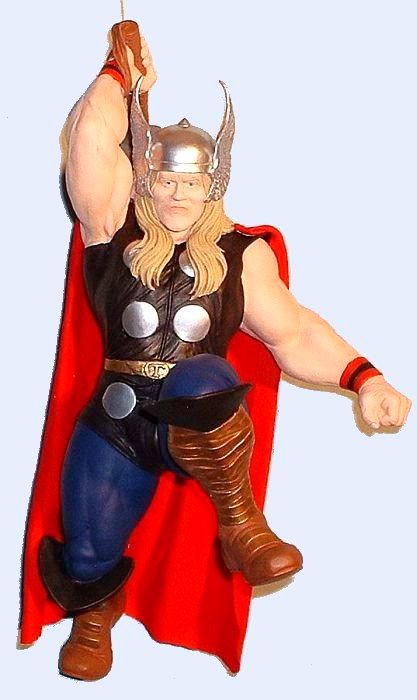 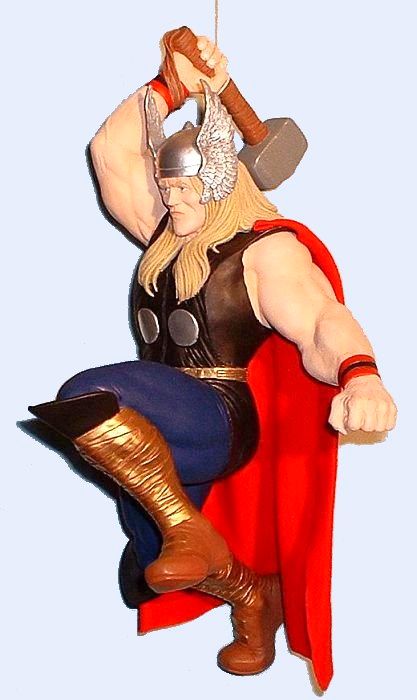 Converted model - assembled and and painted.      Displayed by hanging it from the ceiling.