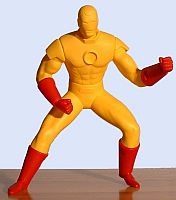 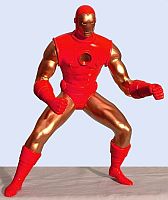 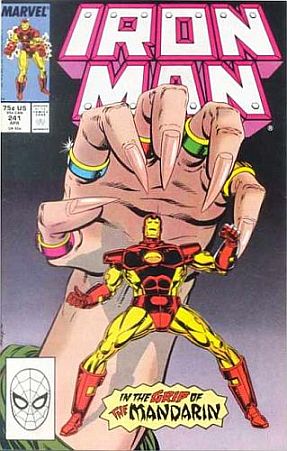 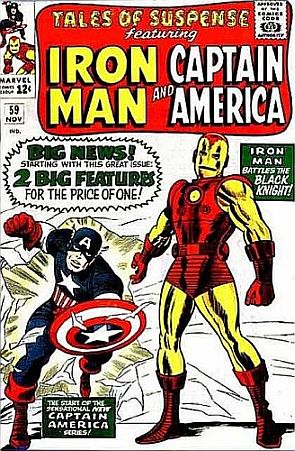 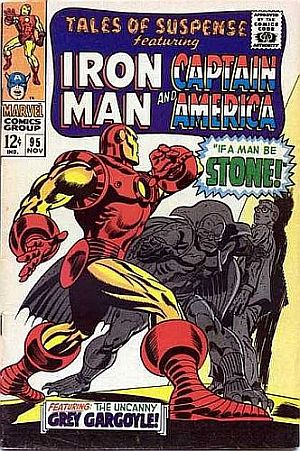 The photo below shows the original kit, trimmed and assembled. I numbered each of the conversion or modification points to better illustrate the "task at hand" 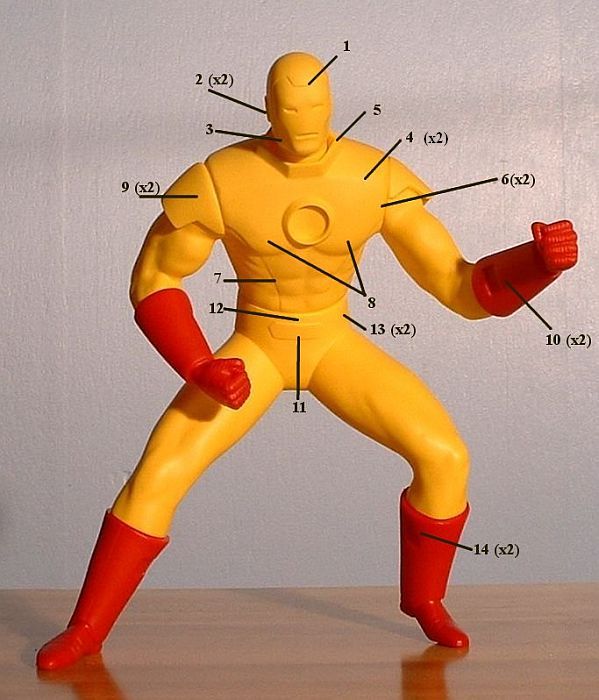 Kit - assembled and "snapped together"

I used five materials to help me with this project ...

I used these specific tools which would not normally be used to build a vinyl kit ... 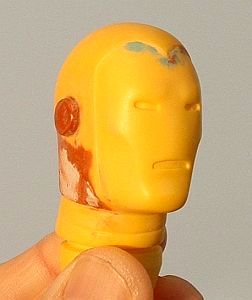 The head with modifications #1 through 3. 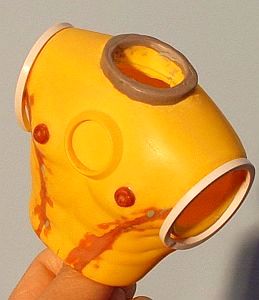 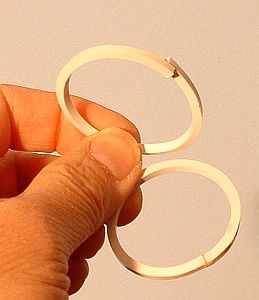 Upper torso with modifications #4 through 8. Shoulder Rings made from styrene strips. 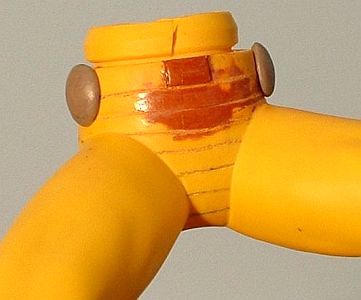 The lower torso with modifications #11 through 13.

After grinding-off the funny shaped thing on the front of his shorts, I had to putty to smooth-out that area: 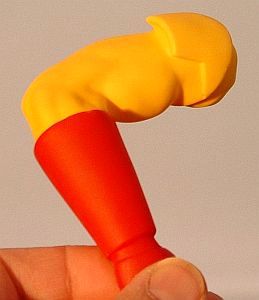 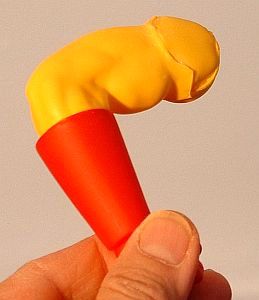 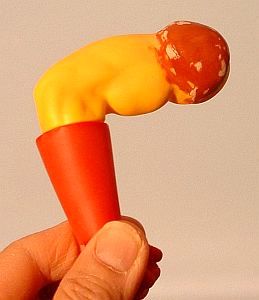 For each arm, the shoulder pad is cut-off (photo 2 above). However, this leaves a hole and there is nothing to apply the putty to. So I reused the cut-off shoulder pad, and glued it to the bottom of the hole, from inside of the arm. This now gave me something I could apply putty to. I used Squadron white putty for the coarse coat, and Bondo putty for the finer coats. After shaping it and sanding it to be like a shoulder muscle, I then glazed the putty with thin super glue, to help prevent the putty from cracking (photo 3 above).

Reshaping the boots and gloves was probably the most tedious and challenging of the conversion steps. Since most of the vinyl had to be removed from each boot or glove, and each is just a shell, the structural integrity and basic alignment of the top of the boot or glove, with the foot or hand, had to be maintained !! 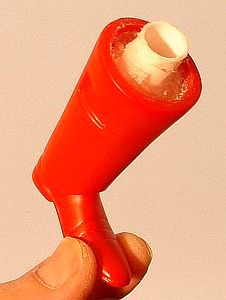 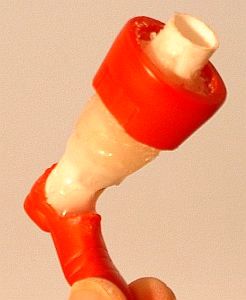 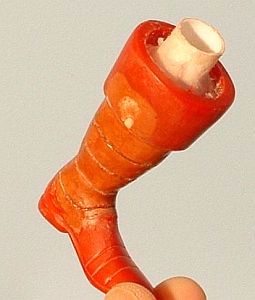 As in photo 1 above, for a boot, I glued a 1/2" diameter styrene tube to the inside bottom of the boot. I then filled the boot with hot glue. The trick was not to get the hot glue too close to the top of the boot, which would later make it difficult to insert the bottom of the leg into the boot. But not high enough, and the remaining "cuff" of the boot won't be strongly held by the hot glue to the styrene tube !! After the hot glue cooled and set, I then cut-off the vinyl covering the calf area of the boot, leaving just the desired cuff and show (photo 2 above). Some of the hot glue was then cut-off or ground-off with my Dremel tool so as to allow for putty to be applied. Using an awl, I tried my best to make lines/grooves/stripes in the boots (photo 3 above). 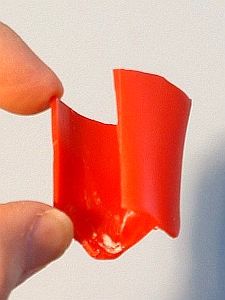 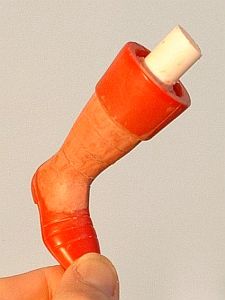 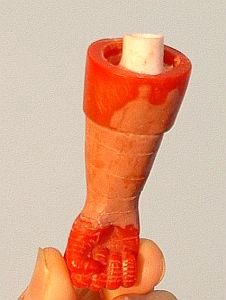 In photo 4 above you can see the portion of the boot that was cut-away and discarded.
Photo 5 above shows the other boot after I did the same process to it.
Photo 6 above shows one of the gloves. The process was similar to the boots, except that I used a 3/8" diameter styrene tube for each glove. 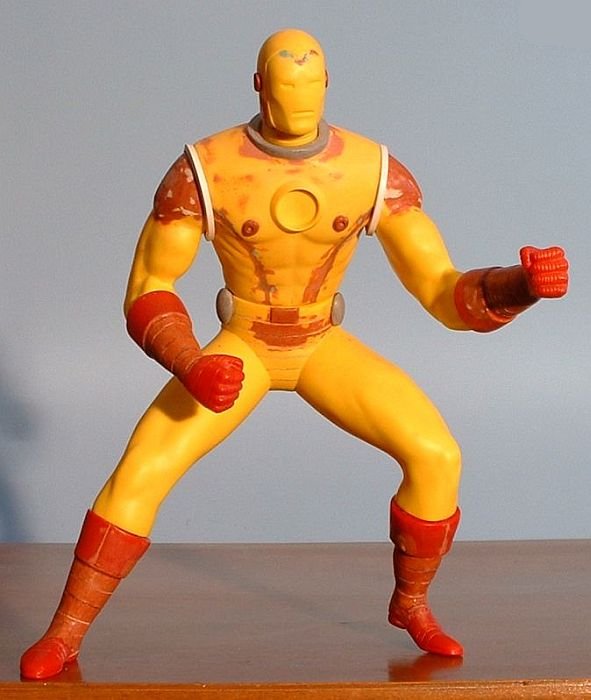 Kit with above conversions - assembled and "snapped together"; ready to be primed and painted. 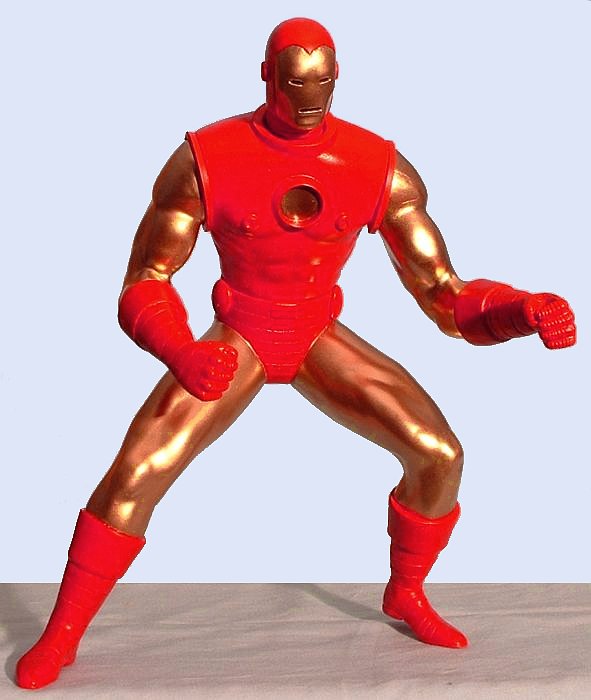 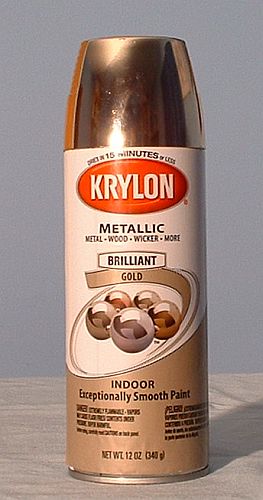 Converted model - assembled and and painted.

For the gold parts, I used Krylon's Metallic Gold spray paint. This produced a very shiny and SMOOTH gold effect. I thought the result was excellent !!

For the red parts, I decided to first air-brush them with a coat of Createx Opaque Airbrush Red. This opaque coat hides all the irregularities in the primer coat, but is a very flat and pastel-colored red. So I then applied a coat of Createx Transparent Airbrush Red over the opaque coat. This produced a smooth, brilliant red, with a glossy finish to it.

Unfortunately the photo still seems to show the red with too much yellow in it, rather than the "deep" red that it is. Also, the red is so bright, that I couldn't take a proper photo ... you can barely see the stripes/lines in Iron Man's shorts, gloves and boots