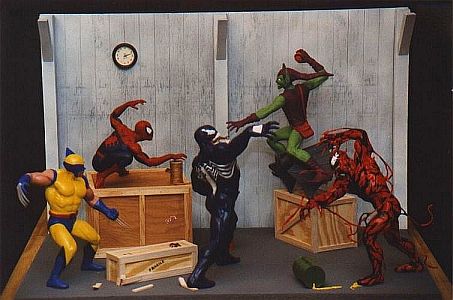 Diorama with the first five Horizon models that I ever built.

Note: To see the updates for each of the Galleries, go to that Gallery's update section.

Thanks for visiting my Gallery of "figure" models, which consists of characters from a variety (mixture) of themes, from comic books, to sci-fi TV and movie.

The diorama above shows the first five Horizon models that I ever built, in a variation of a scene from'Maximum Carnage', the Spider-Man mini-series from 1993. All of the models are 1/6 scale, and thus this warehouse scene is pretty big. It was scratch-built built by a friend of mine (Tom Sosenko). I added Wolverine, which was actually from a kit which had him in his pre-X-Men brown and orange costume. I modified him to have the classic yellow and blue costume, including the shoulder pads, but I didn't put the tiger claws on his upper body. Later, I built Horizon's X-Men version of Wolverine which was "much cooler" ... see it in the 'Marvel Comics' Models Gallery (link in left-hand column).

Currently I have nine Galleries of Models:

To view each individual gallery, in the links menu at the top, click on the links under Figure Models.

Before going to my galleries, to view the photos and reading my commentary on the kits I have built, it may be helpful to have some background on the materials and techniques used to build these kits. To do so, go to these links:
Getting started with Vinyl Kits
Getting started with Resin Kits
Gremlins in the Garage Web Site