In May of 2010, my buddy Tom Sosenko, asked me to refurbish a scratch-built 1/96 scale model of a WWII Cannon class Destroyer Escort, (see photo above). Tom had bought it from a fellow local "Radio-Control Boat Club" member, Bill Weis. Weis originally built it, and then sold it to Tom before he passed-away. Tom wanted me to add "some color" to it since almost everything was a monotone gray. Also some of the items like depth charge launchers and machine gun nests supports, etc. were broken or missing.

Since Tom and I like models to be as accurate as possible, we decided to try to make it as close as possible to an actual ship. Since we couldn't find any WW II Destroyer Escort with the number 789, we chose to model it after the USS Slater, which actually still exists, and is docked in nearby Albany, NY. Here is a link to the web site showing the Slater as it currently exists: Destroyer Escort USS Slater, docked in Albany, NY

The Slater underwent many modifications from it's WWII days, so we used a black and white photo I found of its maiden voyage of February 1944. To help with colors and items like the floater nets, I used photos of the current Slater, from the Albany-based web site.

Below is a photo of the completed refurbishing: 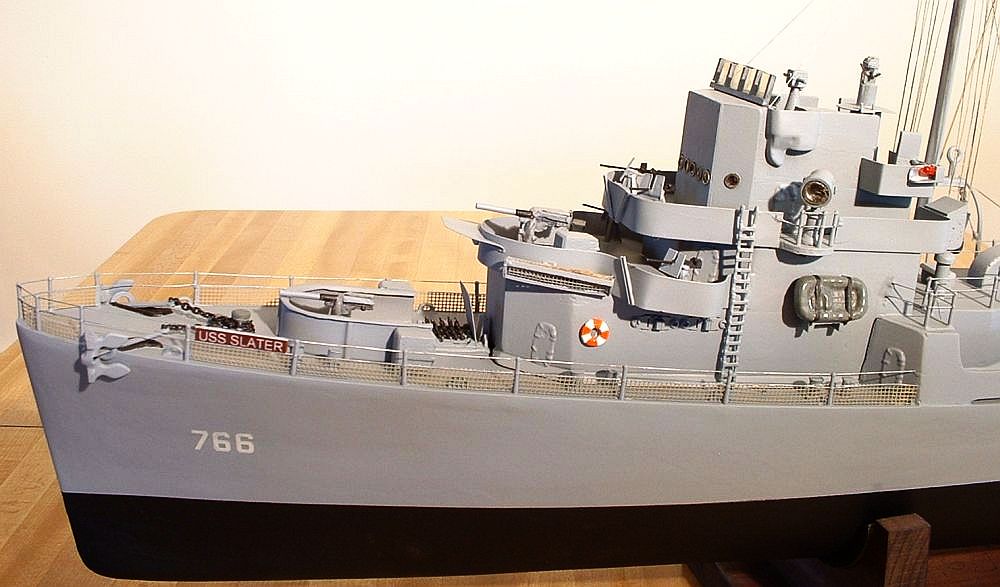 Close-up of Bow area (port side)

Close-up of mid-ship area (port side)