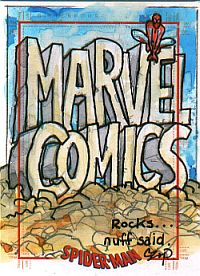 Many of you who know me well, knows that my main passion within the Marvel Comics Universe comes from the fact that I grew-up in the Silver-Age (SA). So when Rittenhouse Archives (RA) released the Complete Avengers sketch cards in 2006, it was my intent to mainly go after SA characters. But I wound-up getting multiples of characters like Iron man, Thor, etc. so I decided to make a whole page for each of those characters. But instead of 9 sketches of the same character, in some cases, I included other heroes or villains, that were originally associated with that character.

In the first half of 2008, with RA's releases of the Women of Marvel and Invincible Iron Man sketches, rather than try to make standalone pages for those, I decided to merge them with the existing Complete Avengers pages, using themes already established with the Complete Avengers sketches.

In early 2012, RA released the Marvel Greatest Heroes: The Avengers sketches. I got enough of them to make three pages. I put them into the Avengers Gallery.

In mid 2015, RA released the Avengers Silver Age sketches. I mostly got the ones of Martineck's Cover recreations. I put them into the Avengers Gallery.

In late 2008, with RA's release of the Fantastic Four Archives sketches, I merged the two existing pages of FF-related sketches that had been created from CA and WoM, with the new FFA sketches. Though there are not as many characters to deal with as with the Avengers, since the FF was my favorite comics as a kid, I initally had about as many pages for FF as I did for the Avengers

In mid 2009, RA released the X-Men Archives sketches. I merged the two existing pages of X-Men related sketches that had been created from CA and WoM, with the new XMA sketches. Though I was not a big fan of the Silver-Age X-Men as a kid, I realized their importance in the post-Silver Age Marvel Universe. After studying their history, and with a wide array of popular characters to choose from, I was able to create quite a few X-men themed pages.

In late 2009, RA released the Spider-Man Archives sketches. I merged the one existing page of Spidey related sketches that had been created from CA and WoM, with the new SMA sketches. Since my favorite sketch card artists, John Czop, and now Buddy Prince worked on this series, I was able to create quite a few Spider-man themed pages

To view each individual gallery, in the links menu at the top, click on the links under Sketch Cards.